An armload of kittens

I am late rising today.  I had one of those nights where I awakened at 4 and ended up tossing and turning and no matter how hard I tried it took a long time to drift back to sleep. But there is a complicating factor over the last month: three kittens who love to gallop down the hall and bump into the bedroom door as though they were knights with a battering ram.

Bessie, Billie and Louie were rescued after their mom was hit by a car in a nearby town when they were just 2 weeks old.  A neighbour had noticed them under a porch and an area rescue group came and literally saved their lives,  A torrential storm hit that very night and they would have perished.

We had just said goodbye to our 16-year old Cadycat.  When I went to the rescue lady's house to see about getting a kitten, I never anticipated coming home with three.  But they are a unit. To take two and leave one would have been unconscionable.  With costs covered we knew we could give them a good home.  They are absolute sweeties.

They have been sleeping in the bathroom at night where access to food and litter is immediate and the three of them could curl up on the crate and sleep the night away.  But over the last week they have become noticeably larger and when I found that one was sleeping in the sink and the bathroom was feeling cramped, it became evident that new arrangements must be considered. 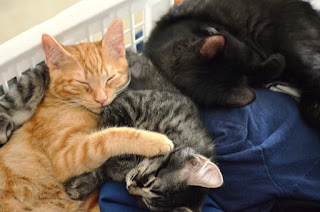 So, a few nights back I closed the door to the kitchen and gave them the run of the living room and washroom.  They were delighted!  I also left my door open.  They had joined me for a few naps and I was hopeful that they would figure out that the bed and the lights out meant sleep time.

It was a vain hope.

No sooner had I gotten under the covers when stealthy kittens came into the room. Suddenly I was the object of attack.  My covered feet were apparently an invitation to sink needle-like teeth through the comforter into soft flesh.  Then they galloped down the hall only to return and launch full steam at my prone body. They were having a blast.  Me, not so much. The capper was when one of them bounded off my face digging claws into my temple and forehead.  Clearly, this was not a good idea.

There is a limit.  Back into the bathroom they went to sleep it off and have a kittycat time-out.

The next night I closed my door so they could have the run of the living room and washroom.  They were overjoyed to see me when I came out of the bedroom in the morning.

Last night I left the door open again. As an experiment.  After an initial energy spike they left for the living room and I fell asleep.  Which brings me to 4 a.m.  I was tossing and turning trying to get back to sleep and one of the kittens jumped up on the bed.  This time I was the object of cuddles. The others jumped up too.  Little kitten bodies pressed close to my neck, shoulder and kisses on my face. Everyone settled and we all finally got to sleep. 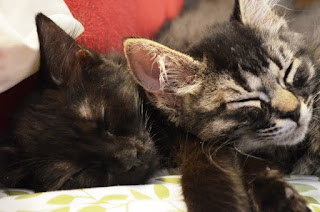 There is something so touching and beautiful when a little creature offers such trust.  When you realize that they see you as pseudo mom and caregiver. And when you realize that the kitty cuddles, the affection offered with such delight, is a kind of universal gratitude that transcends human and kitty boundaries.  I am grateful for them too.

This morning with the chill of autumn in the air, it was toasty under the blankets. Once again I was awakened by a little kitten trying to get comfortable in the space between my chin and neck.  Then another came and flopped on my chest.  Then they flopped on each other with the third deciding the curve of my knee was nice and warm.  And it struck me as they purred away that in this moment, everything was perfect.  We were safe and warm, we were relaxed and content.  The day could start without us for a little while.

And now I am in the office looking at the "to do list" and having coffee.  I can hear the three of them galloping around doing what kittens do.

It comes to me that while we have rescued them  in many ways they have rescued me.  They are helping me be mindful of the importance of playing and focusing on the moment and taking time to be grateful and appreciating love that comes in all its fullness.  It was a really nice way to start the day.

Have a great day everyone.
Deb

Posted by Deborah Vaughan at 07:07